MAGAZINE: PADDLESPORTS INDUSTRY AGAINST PLASTIC – Paddlesports takes a stand against plastic, avoiding, collecting, and repurposing it.

The rising tide of environmental awareness has continued into a new year and a new decade in the paddlesports industry, with more environmentally-friendly products and a plastic-free approach to paddlesports that is changing the game for consumers and manufacturers alike.

Visit SUP athlete Cal Major’s Paddle Against Plastic website, and you will find horrifying facts about the impacts of single-use plastic on the environment. For example, did you know that an estimated eight million metric tons of plastic trash ends up in our oceans every year? Worse, 80% of marine litter originates from land-based sources, meaning that to make it to the sea, it traveled via our waterways, our rivers, lakes, canals, and streams.

Major, who organizes Paddle Against Plastic SUP expeditions as well as ocean clean-ups, is not alone in her passion for generating awareness of the impacts of single-use plastics and inspiring others to make a change, however small. It is a mindset paddlers and paddlesports companies are taking to heart more than ever, from production to personal paddle time.

Aligning the interests of consumers and manufacturers in favor of supporting healthier waterways is a powerful catalyst for change. While kayak manufacturers have used cost-effective methods of recycling waste polyethylene for years, recently, more companies are choosing to promote the environmental benefits of this choice. Why? It is what the market wants to see. Consider, for example, the success of Palm/Islander Kayaks’ Odyssey kayak, which is made using recycled-marine waste and debuted at PaddleExpo 2018.

On her 1000-kilometer SUP circumnavigation of Wales, Sian Sykes collected waste, gave educational talks, and raised money for charity, all while asking others to reduce their use of single-use plastics. Sykes was supported in her journey by like-minded sponsors, including Starboard SUP and Peak UK.

Starboard SUP, like global powerhouse brand adidas, has chosen to partner with PARLEY, a company focused on reducing and preventing ocean plastic pollution. “To create change,” Parley’s website proclaims, “We can stop producing more plastic right away and use up-cycled marine plastic waste instead. Everyone has a role to play.” Their three-part strategy includes avoid plastic wherever possible, intercept plastic waste, and redesign the material itself.

“All of Peak’s new whitewater and touring jackets and legwear is now be made from new fabric containing yarn made from recycled plastic.”

All of Peak’s new whitewater and touring jackets and legwear is now be made from new fabric containing yarn made from recycled plastic. Their redesigned packaging uses recycled cardboard tags and a piece of twine rather than individually wrapping items in single-use plastic film. Peak UK won the 2019 Paddler’s Awards Special Jury Prize for their “Peak Eco” initiative. When founder and owner Pete Astles, a long-time advocate of the environment, came on stage to collect the award, he commended others for their efforts in actively protecting the waterways that drive and inspire our sports. Peak also issued a subtle challenge, asking the room, “Will you join us in making this a priority?”

One way to contribute is making more environmentally friendly decisions in the manufacturing process – using recycled materials, responsibly managing waste, etc. Another is to team up with and support existing organizations or advocates. Tahe Outdoors is currently working in partnership with the Let’s Do It World organization who organizes the World Cleanup Day each year. They will be launching a non-profit kayak rental service in the Baltic Sea region where rentals are free for paddlers who collect trash.

The German-based Lettmann supports The Clean Rivers project, while this October, The UK-based Dewerstone, whose versatile Lifeshorts 2.0 are made using recycled bottles, joined the organization 1% For The Planet, committing 1% of all their sales to support environmental non-profits, such as Save Our Rivers. “We need to continue to make good choices in what we do and use our influence to educate and aid others in making good choices, too,” explains Dewerstone founder Rory Atton.

1% for the planet was begun by Patagonia founder Yvon Chouinard and Craig Mathews, founder of Blue Ribbon Flies, in 2002. Their belief that because companies profit from the resources they take from the earth, they should protect those resources, helps connect us back to why many of us chose paddlesports in the first place.

“People protect what they love,” argued legendary ocean-explorer Jacques Cousteau. While true, sometimes we need a kick-start in the right direction. With companies supporting environmental initiatives like beach and river cleans and education sessions, plus finding new, environmentally-conscious ways to build and ship quality products that last, we as an industry are building a community committed to protecting and preserving the areas we love.

The belief that manufacturers can and should educate and influence consumers in making good choices is infectious. However, we as an industry still have significant room for improvement. And, the ultimate power may remain with the consumer. When buying new, yes, of course it is better to support companies and products that have been sustainably manufactured, regardless of price. However, perhaps what is ultimately best for everyone-the planet included- is investing in quality over quantity. Slowing down and producing less, but committing to gear that lasts. 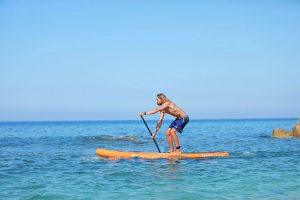 The new FUSION features more generous volume and payload that cater to those looking for easier ride and carrying more luggage.

Jackson’s first fishing kayak in three years aims at answering the challenges of big water fishing. Jackson Kayak is now shipping The Knarr to dealers across the US, Canada and Europe.  The Knarr FD is the ultimate kayak for everything